Creative vision at work in the world

“We, too, can create the Medici Effect…We can do it by bringing together different disciplines and cultures and searching for the places where they connect.” Frans Johansson

Innovation is creativity at work in the world

In his book, The Medici Effect, Frans Johansson defines creative ideas as being both new and valuable in some way. Creative ideas only become innovations when they are successfully implemented in the world.1 This distinction makes a lot of sense when you consider that the word “innovation” comes from the Latin innovare meaning “to change; to renew.”2 Remember this connection ebtween innovation and change. It will be important as we consider the innovator’s creative identity in this reading and will be the factor that we will use to distinguish their approach to creativity from others we will study in this series.

Innovators can be seen as visionaries who combine a curiosity and openness to the world with playful imaginations that experiment with and connect ideas across boundaries to arrive at something original. From the outside, their abilities can seem almost magical and something that only so-called geniuses can ever hope to do. However, according to Jeffrey H. Dyer, Hal Gregersen, and Clayton M. Christensen in “The Innovator’s DNA,” innovators work their magic by following a set of discovery skills that anyone can cultivate within their own life: associating, questioning, observing, experimenting, and networking. 3

It is the way innovators both see the world (mindset) and how they act in it (skillset) that shapes their creative identity. Both can be developed by anyone who determines to follow in their path. In this reading, we will use the IDEAS Helix as a lens through which we can focus on three aspects of the innovator mindset that can help us better realize our ideas in the world: 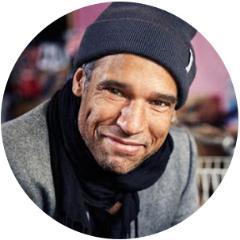 How would you connect bicycles, coffee, and education? For Jimmy Östholm, founder of Vèlosophy, you create RE:CYCLE, a bicycle with a frame made from used aluminum Nespresso coffee pods. And like all Vèlosophy bicycles, for every bike purchased, one is donated to a schoolgirl in Ghana.

Östholm perfectly captures what it means to be an innovator through his ability to combine passion with purpose, connect diverse ideas across boundaries, and realizing his creative vision in the world.4

This can be seen in their approach to exploration, where innovators often start with something they are passionate about and follow it until they ultimately find their unique creative purposes.

When Östholm decided to start a bicycle business, he says “I made a promise to myself. I wouldn’t start it if I couldn’t find a greater purpose.” He already had a passion for bicycles and, as a designer, he knew how to make products he could sell. But this wasn’t enough. His search led him to discover the impact a bicycle can make for someone living in the developing world. This led him to World Bicycle relief with whom he began the One for One promise, where Vèlosophy donates a bicycle for every bicycle sold.5

Since innovators are noted observers who question the world around them, they are also more open than others to taking detours from their original plans when they discover opportunities that align with their values. For Reshma Saujani, founder of Girls Who Code, she found her passion while on the road as part of a 2010 run for Congress. She was focused on her political race but noticed that, in many of the schools she visited, there were not many girls participating in computer science and technology programs. She understood that these were the jobs of the future and female students should have the same access as their male counterparts. This led her to create Girls Who Code “to close the gender gap in technology and change the image of what a computer programmer looks like and does.”6

Johansson identifies the most innovative ideas as those that happen when creators step “into the Intersection” and connect diverse disciplines and fields. These unlikely combinations create whole new worlds for others to explore and create within. Johansson has named this approach of working at the intersections of fields and disciplines the “Medici Effect” after the Medici family who ruled over Florence in the 15th during the age of the Renaissance. Albert Einstein called this method of generating creative ideas "combinatory play." He believed that the skill of connecting seemingly unrelated concepts or events was the key to producing breakthrough ideas.7

For Jimmy Östholm, he had already seen Nespresso collaborate with other brands and imagined partnering with them to make a bicycle from their recycled aluminum. He figured out not only how to connect bicycles and coffee, but he also connected this vision back to his company’s mission. These multiple levels of intersections created a truly innovative project “well rooted in today’s challenges, sourced with responsibility and sustainable made, and strongly driven by a social cause.”

The musical Hamilton is a recent example of an unusual combination of ideas leading to innovation, in this case, in the arts. After reading a biography of founding father Alexander Hamilton, Lin-Manuel Miranda drew a connection between Hamilton’s ambition to define himself on his own terms with that of the best artists in hip hop. Combining the founding fathers with hip hop and using actors of color to represent them on stage broke all conventional rules of how we treat this period of American history. However, the acclaim Miranda and Hamilton have received proves that his unlikely combination was both innovative and wildly popular with his audience.8

Create: Realize your creative vision in the world

For innovation to occur, passion and great ideas are not enough. We have all seen a new product and realized, "Hey, I thought of that!" As discussed earlier, innovations are creative ideas that have been put to work in the world. That means that to earn the name, innovators must do the work of bringing their ideas to life as a final expression of their creativity.

For Östholm, he created Vèlosophy to realize a bigger purpose than selling bicycles. It took time, but because he pursued his passion, he eventually found inspiration and a mission. He used that to create a vision for his company that took shape in both his One for One donation program and the RE:CYCLE collaboration with Nespresso. Lin-Manuel Miranda had the wild idea to create a hip hop musical about the founding fathers that became Hamilton. And Reshma Saujani took a sideways journey from politics to education and founded Girls Who Code. Each of them followed replicable paths that can inform our own journeys towards a more creative life. And this last takeaway reminds us as well that the reason we know their stories is because they not only had an inspired idea, they did something about it. That's what made them innovators.